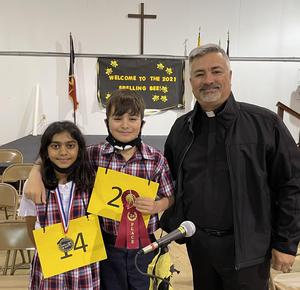 Sacred Heart School held its annual Spelling Bee made up of 36 first-fifth grade contestants on Tuesday, Feb. 2.
There were 13 rounds of words and Arianna Bhakta won by spelling her 14th word correctly. Diego Bernal, 5th grader, won 2nd place and was quick to congratulate Arianna after she was named the winner. Miss Bhakta is a fourth grader at SHS and was the Spelling Champion at last year's Bee. She went on to compete at the Spelling Bee in Corpus Christi.
Source: Kathy Barnes
Print